Since I was young I have always enjoyed reading books, however a few years ago I completely stopped reading as I didn’t know what I wanted to read anymore since my English Teacher banned us from reading what was my favourite author at the time; Jacqueline Wilson.  Back then I only read Jacqueline Wilson books, so I found finding something else to read really challenging as I was not ready for “teen books” because I wasn’t interested in love or vampires. However for the past year, since just before the first Zoella Book Club I have started reading daily again and I’ve really been enjoying it!

Over the summer I used to take part in the Summer Reading Challenge at the library, so I decided to write a review of 6 of my favourite books for the summer that I have either read recently or last summer!

ISLA AND THE HAPPILY EVER AFTER by Stephanie Perkins
I just finished reading this book and I really loved it! My reasons for reading this book in the first place were not really very sensible, I just really liked the name Isla since I watched Barbie in the Twelve Dancing Princesses when I was little, and I’d never read a book about an Isla before so I just had to read it. The title also suggests that the story is a fairy-tale through the inclusion of ‘Happily Ever After’.
Moving on to the actual book; the story centres around the main character Isla, her best friend Kurt and her first-crush-come-boyfriend Josh. All three are teenagers from Manhattan, New York and attend SOAP – The School of America in Paris.
The story starts in a strange way, with Isla meeting Josh in a Manhattan café called Kismet. Having just had her wisdom teeth removed, Isla acts pretty loopy due to the effect of the painkillers, so her actions are quite rushed and forward, which is really very funny! Josh then walks Isla home and the hilarity continues, until Isla realizes over the course of the summer that she has no way of contacting him, and maybe it wasn’t the start of something as she couldn’t find him anywhere.
Over the next few chapters school starts again and there are a lot of will-they-won’t-they moments until chapter 8, when they officially start going out together. Josh and Isla continue to be in their loved up state until Josh is expelled and everything starts going downhill. However, through all the twists and turns the story does actually end on a very emotional happy note. My favourite quotes are from the last 2 pages; “…the last traces of shyness and doubt have been removed from my step. I’ve found the Right Way.” and “Isla; ‘It’s beautiful. But what comes next?’ Josh; ‘The best part . . . The happily ever after.’”

SINCE YOU’VE BEEN GONE by Morgan Matson
I read this book last summer and it is a very long read (small font and 449 pages) but I really did enjoy it! Also the main character is called Emily so that’s a bonus for me! I chose to read this because the image on the front is really summery with the ice cream and it’s hard to say the title without singing the Kelly Clarkson song!
The story begins with Emily receiving a list in the mail from her best friend Sloane who has been missing for two weeks. Over the course of the story Emily completes every item on the list in the hope that it will bring her closer to finding Sloane. The book features a lot of flashbacks which is great as you get to learn more about Emily and Sloane’s friendship before she went missing.
One of my favourite features of the book is the addition of the iTunes playlists! Especially as I knew some of the songs (e.g. Taylor Swift) and I feel this makes the book different and unique. I also liked that Emily’s brother was called Beckett as I had never heard it used as a first name before and I read it just after I finished the final season of Castle, so that reminded me just how much I loved watching Castle.
AIR by Lisa Glass
The book follows a week in the life of Iris, a teenage surfer from Newquay, Cornwall.  After winning a surfing competition the previous year and becoming the face of Billabong UK, Iris is invited to compete in a surfing competition in Miami which is running alongside her boyfriend Zeke’s surfing competition.

Over the course of the story Iris tries to figure out whether following her heart to Miami was the best choice or her biggest mistake. Iris meets many of Zeke’s friends which make her feel detached from Zeke as she realises he had a whole other life with them before her. She has to face up to Zeke’s manager who bullies her because he feels female surfers are not as important or popular. Iris also misses her friends in Newquay and celebrating her birthday with her family (instead they do this over Skype).
To find out more about how Iris and Zeke met you can read the first book in the series: Blue. However I read Air first as I didn’t realise that it was a sequel, but either way I found the book was good as a standalone story.
THE ISLAND OF LOST HORSES by Stacy Gregg
This is the second Stacy Gregg book I read, the first being The Princess and the Foal, and I really enjoy her writing! In this story Beatriz finds the diary of a Spanish girl named Felipa from centuries ago. Beatriz’s mum is working on a boat off of a remote tropical island in the Caribbean. On the island lives a lady named Annie and some elusive horses. One horse becomes especially fond of Beatriz known as the Abaco Barb or a Medicine Hat due to its unique markings.
I like that the two stories run alongside each other, as if you are reading Felipa’s diary at the same time as Beatriz. I also like that there are two settings, present day and the past, similar to The Girl Who Rode the Wind and the most recent Diamond Horse which I just bought and absolutely cannot wait to read!
If you enjoy adventures, and horses I definitely recommend you read this book!

AFTER IRIS by Natasha Farrant
This book is the first of the Diaries of Bluebell Gadsby series by Natasha Farrant. Bluebell a.k.a. Blue tells the story of her and her family getting used to life without her twin sister Iris. With both parents away for work the children are left in the charge of a live in babysitter; Zoran.

A boy, Joss, the grandson of the next-door neighbours the Batemans is spotted in their back garden and quickly befriends Blue and hatches a plan to prank Dodi, Blue’s ex-best-friend now bully. Joss and Blue become quite close until Blue realises she has a crush on him, and then suddenly Blue looks out the window and sees her older sister Flora kissing Joss!
Even though the background theme is of loss and separation, there are a lot of funny moments throughout the story which make it both hilarious, poignant and moving. The story is told through a series of video transcripts and diary entries which I felt made the book quirky and unique.
GIRL ONLINE ON TOUR by Zoe Sugg 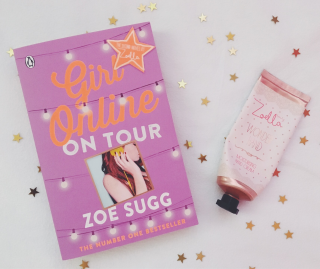 I chose the second book of the series for my book review as it is set in the summer whereas the first is set at Christmas. If you haven’t read the first book already, the series is set around the life of the main character Penny who writes a blog; Girl Online. Penny’s mum runs a bridal shop and is asked to do a wedding in New York, where Penny sees Noah for the first time singing on the stage in the hotel. Noah turns out to be a famous teen rock star. Living on different sides of the world the pair embark on a pretty tough long distance relationship.

In the second novel, Noah invites Penny to tag along on his European music tour. The trip turns out to be a lot less romantic than Penny hopes, with Noah’s jam packed schedule they have barely any time to see each other let alone do all the sightseeing they’ve planned, dealing with threats from jealous fans and missing her family and her best friend Elliot.

Overall I really love the series, and I like the addition of blog posts, letters and text messages in the books as I feel it makes the story more fun to read and it kind of reminds me of the days when I read books with pictures and of course I miss that. If you haven’t started the series yet, I think they’re most relevant to read in Year 11 as that is when the first two are set.

And that’s it! Comment below if you have read any of these books before and whether you enjoyed them or what books you would recommend. Also let me know if you would like me to do more book reviews!

This site uses Akismet to reduce spam. Learn how your comment data is processed.

🐰Hop into Spring🐰
I love to dance! ❤️ #worldballetday What are some of your hobbies? 🐰
I love baking tasty Easter treats 😋🎂